CUTC in the News

(WASHINGTON) – Five students, four leaders in transportation academia and one long-time transportation industry advocate from both the public and private sector will be honored by the Council of University Transportation Centers (CUTC) for outstanding contributions to transportation research and education at a Jan. 12 awards banquet in the Nation’s Capital.

Nuria Fernandez, CEO of the Santa Clara Valley Transportation Authority, is the 2018 winner of the CUTC Lifetime Achievement Award for Transportation Professional and Public Service.

Over fifty other outstanding students from University Transportation Centers across America will also be honored for their achievements and promise of future contributions to the transportation field.

Deputy Secretary, Office of the U.S. Secretary at the U.S. Department of Transportation, Jeff Rosen, will deliver the evening’s keynote address.

Collectively, CUTC members have advanced the state-of-the-art in all modes and disciplines of transportation. In doing so, the membership of CUTC has made significant and lasting contributions to the nation’s mobility, economy, and defense.

More information is available at www.mycutc.com. 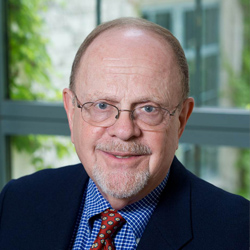 Named after the founding president of the RED, the award recognizes “an individual who has made remarkable contributions to transportation education.”

Dr. Schofer has taught for five decades, preparing transportation graduates at the bachelor’s, master’s and doctorate levels. His students have built careers in transportation planning and operations at some of the largest transit and transportation agencies in the country. Many others have entered academia to teach the next generation of transportation professionals.

Schofer’s teachings extend beyond the classroom, bringing infrastructure design, operations and policies to wide audiences through public lectures, alumni tours to locations like the Panama Canal, and a long-running podcast.

He has also been active in the Transportation Research Board (TRB) for over 40 years, leading activities in transportation data programs, planning, policy analysis and decision making. He has chaired three major policy studies, six TRB conferences, two task forces and the data and information system section. He is a winner of several TRB awards and recipient of the Institute of Transportation Engineers’ Wilbur S. Smith “Distinguished Educator Award.”

Established in 1902, Washington, D.C.-based ARTBA is the “consensus voice” of the U.S. transportation design and construction industry before Congress, federal agencies, the White House, news media and the general public.

(WASHINGTON) —Three leaders in transportation academia, six students, and one long-time industry advocate were honored Jan. 9 by the Council of University Transportation Centers (CUTC) for their outstanding contributions to transportation research and education.

Norman Mineta, former U. S. Secretary of Transportation, and Dr. Edd Hauser, director of the Center for Transportation Policy Studies at the University of North Carolina-Charlotte, were each honored with Lifetime Achievement in Transportation Research and Education Awards at a CUTC banquet in the Nation’s Capital.

Mineta was chosen in the non-academic category for his immense contributions throughout his professional career to transportation research and education. The award honors individuals who have served primarily in government, business or non-governmental organizations. Hauser received the award for distinguished contributions to university-level transportation education and research.

Fifty of the most outstanding students from University Transportation Centers across America were also honored for their achievements and promise of future contributions to the transportation field.

U.S. Secretary of Transportation Anthony Foxx delivered the evening’s keynote address, including comments on the passage of the five-year Fixing America’s Surface Transportation (FAST) Act in December, the first long-term surface transportation bill signed into law in a decade.

“University Transportation Centers play an essential role in helping us create a 21st century transportation system that addresses current and future challenges,” Secretary Foxx said. “We are thrilled that Congress has reaffirmed the significance of these programs by authorizing a new UTC competitive grant program in the five-year FAST Act bill they passed last year.”

Established in 1979 by the major transportation research centers and institutes in the United States, CUTC provides a forum for universities and learning centers to interact collectively with government and industry. CUTC membership represents over 90 of the nation’s leading university-based transportation research and education programs. Collectively, CUTC members have advanced the state-of-the-art in all modes and disciplines of transportation. In doing so, the membership of CUTC has made significant and lasting contributions to the nation’s mobility, economy, and defense.

Additional information can be found at mycutc.com

Earlier this year, the Department of Transportation issued a draft report, Beyond Traffic, which examines the trends and choices facing America’s transportation infrastructure over the next three decades. These include 70 million more people by 2045, a 45 percent increase in freight volume, demographic shifts in rural and urban areas, and a transportation system facing more frequent extreme weather events. The report predicts increased gridlock nationwide unless changes are made in the near-term. This Champions of Change event will honor people who recognize these challenges in transportation, and have endeavored to solve them.

“This year’s nominees are a truly gifted group of individuals who have exceptional vision and foresight when it comes to the issues we are dealing with in transportation,” said Secretary Foxx. “Their exemplary leadership is charting the course for our 21st century needs. I applaud them and I hope to see others follow their lead.”

Marilyn Bull, Morris Green Professor of Pediatrics, James Whitcomb Riley Hospital for Children at Indiana University – Indianapolis, Indiana
Dr. Marilyn Bull is committed to child safety, and has worked with entrepreneurs and manufacturers to develop products to help children with special health care needs travel safely. She and her team created the curriculum on “Safe Travel for All Children,” which is used nationally and internationally for training.

Peter Lagerwey, Regional Office Director, Toole Design Group – Seattle, Washington
Mr. Peter Lagerway has spent more than 30 years managing pedestrian/bicycle planning and design projects with the City of Seattle and as a consultant to communities throughout the country. Mr. Lagerwey developed, refined, and promoted the concept of a “road diet,” which reduces four-lane roadways to three, making room for bike lanes and pedestrians.

Olatunji Reed, Co-Founder, Slow Roll Chicago – Chicago, Illinois
Mr. Olatunji Reed has worked to build a diverse, inclusive, and equitable bicycling culture throughout Chicago, which revitalizes underserved communities, improves health, and increases accessibility. He leads a coalition of cycling advocates fighting for a citywide biking infrastructure that is equitable and beneficial for all Chicagoans.

Elaine Roberts, President and CEO, Columbus Regional Airport Authority – Columbus, Ohio
Ms. Elaine Roberts was instrumental in envisioning, designing, developing, and implementing a plan to build an intermodal facility in Columbus, Ohio. Her leadership led to the opening of the Rickenbacker Airport, a 210,000 lift/truck facility that is the heart of the Heartland Corridor.

CUTC In The News